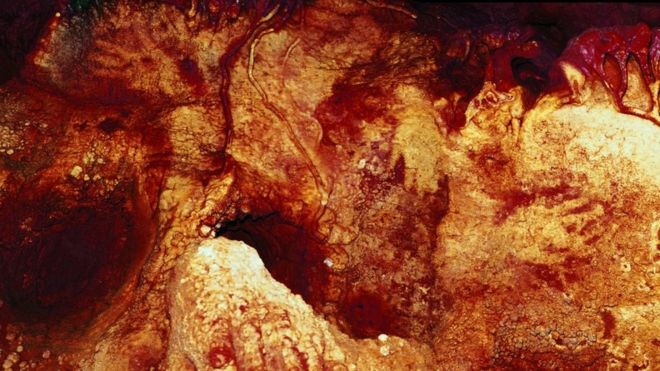 A study in Science journal suggests they made cave drawings in Spain that pre-date the arrival of modern humans in Europe by 20,000 years.

They also appear to have used painted sea shells as jewellery.

Art was previously thought to be a behaviour unique to our species (Homo sapiens) and far beyond our evolutionary cousins.

They occupy three sites at La Pasiega, Maltravieso and Ardales – situated up to 700km apart in different parts of Spain.

The researchers used a technique called uranium-thorium dating to obtain accurate ages. It relies on measuring the radioactive decay of uranium that gets incorporated into mineral crusts forming over the paintings.

The results gave a minimum age of 65,000 years ago for the cave art, modern humans only arrived in Europe roughly 45,000 years ago.

This means that the Palaeolithic artwork must have been made by Neanderthals, a "sister" species to Homo sapiens, and Europe's sole human inhabitants at the time.

The findings are supported by dating of sea shells that were perforated to be used on necklaces and are stained with pigments.

Two of the four samples dated to about 115,000 years ago – again, much further back in time than the known presence of modern humans in the region.

Prof Alistair Pike, from the University of Southampton, who is a co-author of the study, said: "Soon after the discovery of the first of their fossils in the 19th century, Neanderthals were portrayed as brutish and uncultured, incapable of art and symbolic behaviour, and some of these views persist today."

"The issue of just how human-like Neanderthals behaved is a hotly debated issue. Our findings will make a significant contribution to that debate."

Early symbolic artefacts, dating back 70,000 years, have been found in Africa but are associated with modern humans.

Paul Pettitt, from Durham University, commented: "Neanderthals created meaningful symbols in meaningful places. The art is not a one-off accident.

"We have examples in three caves 700km apart, and evidence that it was a long-lived tradition. It is quite possible that similar cave art in other caves in Western Europe is of Neanderthal origin as well."