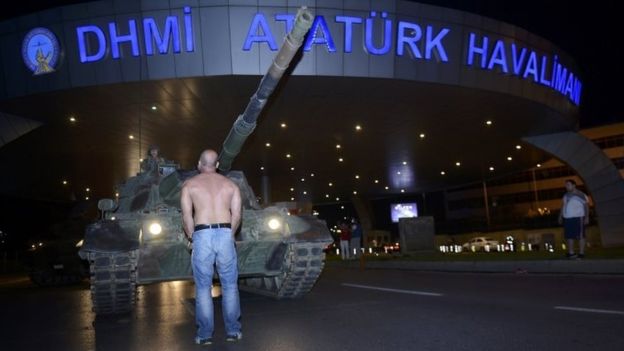 During Friday night’s coup attempt against Turkey’s democratically elected political leadership, I tried, from time to time, to keep an eye on what the international media, including specifically the NYT, were reporting about the situation.  What I saw was shocking and disgusting, and for most of the night I couldn’t bring myself to do more than scan the thoroughly abhorrent headlines that the NYT posted.

I’m still trying to digest what they published, and I plan to write on that topic after more consideration.  For now, I just want to communicate to readers what we experienced Friday night from our neighborhood near the Bosphorus bridges.

Like everyone else, at around 22:00 Friday evening I noticed that something was happening as social media began to be flooded by people posting confused messages about soldiers on the Bosphorus bridges and rumors of a coup.  At first I thought maybe some sort of threat to the bridges had been spotted, but once pictures started hitting facebook and twitter, it became clear that a coup attempt was underway.  However, I should stress that at first, news about what was happening was extremely focused on just one or two places.  The overall scope of the event was not clear until much later.

So I tuned on the TV, and the first notices were beginning to show up on various channels, indicating that something was indeed happening. Simultaneously, panicked messages from friends began to hit my facebook account.  So I began a night of moving back and forth between the TV and my computer, trying to keep track of events and messages.

For those who are wondering, in the first hours of the evening facebook slowed, but then later resumed normal speed.  But in the early hours of 16th July, around 02:30 after midnight, facebook was essentially blocked off.  On the other hand, twitter remained open and functioning at normal speed throughout the night.

But I want to explain something important.  Over those first two hours, general confusion about exactly what was happening gave way to a degree of clarification through announcements from leading political figures.  In the same time-frame, I tried to explain to friends what was obvious:  whatever was happening, it was Fethullah Gülen’s people in the military who were the instigators.

Why was this so obvious?  For those who have remained clear-eyed about events in Turkey over the past four years, unfortunately it was not a complete surprise that Gülen’s followers in the military should be attempting a coup.  Since (a) the Hakan Fidan incident of February 2012 (when the minutes of the secret Oslo talks between the government and the PKK were leaked in an attempt to discredit Turkey’s intelligence boss and Erdoğan’s right-hand man Hakan Fidan), and (b) the sudden and explosive December 2013 attempt to launch judicial investigations into top-ranking AKP figures over allegations of corruption… it has been clear that of the two former allies, Fethullah Gülen and Tayyip Erdoğan, the former was now challenging not only the latter but the entire democratic régime in a final quest for political supremacy.  The fundamental difference between these two, of course, is that Erdoğan is a political leader who has been repeatedly elected by massive margins over the past fifteen years, while Gülen is a cult leader who uses his brain-washed followers to pursue his political pretensions.

Furthermore, over the past several months rumors had been circulating that Gülen’s adherents in the Turkish security forces were mobilizing for yet another extraordinary initiative, perhaps a putsch.  In response, only a couple of days ago the AKP leadership announced that this year’s High Board of Military Staff Affairs (Yüksek Askeri Şura) would be focused on purging Gülen’s followers from the security forces.  For Gülen’s cultists, it was now or never.  And they had no compunctions about wreaking havoc and damage, opening fire on Turkish civilians, and even bombing the Turkish parliament in the name of their insane devotion to Hocaefendi.

As the evening progressed, the first important announcement came from PM Binali Yıldırım, who around 22:30 told the nation that an “uprising” was under way, and that it was coming from a group acting outside the armed forces chain of command.  He also stressed that it would be b rought to a halt.  So we began to watch events unfold apprehensively.

TV channels — at least a dozen were broadcasting all night — showed that the Bosphorus bridges had been occupied by soldiers, but I can’t see the bridges from my apartment, so I could only watch on TV and listen for sounds coming from that direction.  The other main image was of tanks and armored personnel carriers at the entrance to Istanbul’s Atatürk Airport.  Outside, the streets emptied.  On facebook I tried to post informative items and to answer questions.

Between 23:00 and 24:00 a Turkish intelligence official informed the media that an attempted coup was underway and that it would be promptly suppressed.  That was cause for hope, but right around midnight, 00:00 hours, something deeply disturbing happened.

Until about 23:30, programming on the Turkish state broadcaster TRT, Turkish Radio and Television, had continued as normal.  But then at 00:00 an anchorwoman appeared on the screen and began to read an announcement.  She was obviously frightened, reading slowly and enunciating the words carefully.  The over-long and wholly cliché-ridden declaration stated, among other things, that the military had taken over all state institutions and formed an interim governing council. Immediately, similar pronouncements from especially the 1960 and 1980 coups were recalled, and even though it seemed increasingly clear that the coup was not likely to succeed, the announcement was still frightening.  In this sort of situation, when one cannot in any case know exactly what is happening, to have the state broadcaster suddenly taken over by the junta’s troops was bound to have an impact.  We didn’t know, we couldn’t possibly know, that there were actually less than ten soldiers inside the TRT building.

Personally, I truly became worried at that point.  I worried for Turkey and for the future of my eight-month old son.  Surely Turkey was not going to be dragged back into a nightmare of military violence from the past?