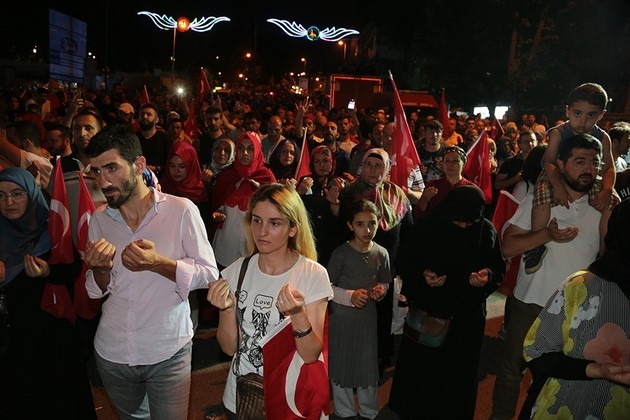 Against the 15th July coup attempt, Turkey threw up a massive popular movement, and succeeding in halting the putschists in their tracks. The people actively demonstrated their opposition to any intervention against democracy. All the very real savagery displayed by the did nothing to intimidate the people and turn them back.

Neither did this awakening of an anti-coup spirit remain limited to 15th July. The people remained vigilant long after the stark evil of the coup had been suppressed. Old and young, men and women, they rushed to every single point wherever troop movements or some other kind of threat seemed to be getting under way. They kept filling all public spaces, and showed everyone that they were determined not to surrender their democratic gains to the murderous would-be putschists.

Inevitably there was a high price that had to be paid for such defense of democracy. Over two hundred citizens died, and more than two thousand were injured. The instigators of the coup vented all their naked malevolence and pent-up hatred (all the stronger for having been suppressed and disguised for so long) on the people. But they for their part would not be cowed or subdued. They came out to oppose tanks and aircraft, and risked their lives in order not to abandon the streets to the forces of darkness.

Anywhere else and at any other time, this was a glorious popular movement that would have been applauded as yet another Prague Spring. One would expect the West, the standard-bearer of democratic values, to appreciate this democracy line that was drawn by standing up in the face of bullets. If a very tiny portion of what happened in Turkey had happened in a Western country, it would have been glorified, praises would have been heaped on those resisting to defend democracy, and the underlying philosophy would have been subjected to intense scrutiny.

Many a story of heroism would have been told and retold. Humankind, it would have been declared, owed an immense debt to those who gave up their lives defend their collective democratic will against the aggressors’ assault. Lists would have been drawn up of the lessons to be learned from all the various individuals who participated in this resistance — the woman who stopped a column of tanks all by herself, the man who sacrificed his truck, his one and only source of livelihood, by using it to block the way of yet other tanks. Hats off, people would have said, to the creativity and altruism of the peasant who set his growing crops afire to prevent war planes from taking off from a nearby airfield. The women who carried the youngsters of their neighborhood in their truck to the town square would have been eulogized.

None of this, however, happened. The West, including its governments, its institutions and its media, failed pitifully in a test of democracy it had seemed so concerned about. It shed its mask of democracy. When the uprising first started, Western governments and institutions did not adopt a clear stance by the side of Turkey’s lawful, legitimate government. They waited and procrastinated, making it clear that they would adopt this or that position depending on which way the ball bounced. No-one has had the slightest doubt that the West would have “continue to work” with the putschists if the latter had succeeded.

With regard to defending democratic values, the Western media, too, adopted a miserable position. On the Serbestiyet web site, Halil Berktay, Akın Özçer and Ceren Kenar thoroughly exposed the shameful performance of the Western media, as did Sabiha Şenyücel Gündoğar and Ayşe Yırcalı for Al Jazeera. Their analyses left no room for doubt.

Insofar as I have been able to follow, in the beginning the Western media smugly and impatiently waited for the government to be overthrown. When this did not happen, they started to develop arguments aimed at devalorising the defeat of the coup. First, they began to argue that this had been a “fake coup.” According to this argument, everything was a ‘”game,” and the coup had been staged by Erdogan, the aim being to enable Erdogan to suppress the coup, thus making a hero of him and increasing his power. There was no real coup; everything that had happened had been nothing more than a “theatre play” staged to ensure the adoption of a presidential system and the elevation of Erdogan to the position of a legally all-powerful president.

Though it is difficult to believe, all this was written perfectly seriously. Even people who had written thick volumes on Turkey’s modernization, and whose works are widely accepted as reference material, came out to calmly present such ludicrous arguments on some television channels. But such wild talk was incapable of being sustained for long. This, indeed, is what eventually happened; the “game” or “fake” thesis that had been so arrogantly propounded soon faded away, becoming the stuff of social media stag talk.

“No more than a fight among Islamists”

When the “fake” or “game” or “theatre” arguments ultimately failed, a second and somewhat more elaborate argument was put forth, according to which the coup attempt was nothing more than a power struggle among Turkey’s Islamists pitting the supposedly more moderate Gulenists, who were also said to be more open to the West, against those who were portrayed as more strictly anti-West hard-line Islamists supporting the AKP.

The point is that this re-wording of the current alignment did away with the unpleasant notion of forces hostile to democracy versus democracy. This time, the AKP side had somehow come out victorious. But this could not be interpreted as a development in favor of democracy. Yes, the coup was bad, but its failure might be even worse. For the AKP was becoming more and more authoritarian. As for Erdogan, who was already holding the reins in his own hands, he would now not refrain from riding roughshod over everyone on his way to a presidential system, thefore to his re-defined presidency, therefore to outrightdictatorship. Hence there was no reason to be happy about the suppression of the coup.

This was another argument which was falling apart right from the start. First, it made no sense to put the popularly elected legal organs of government on the same footing (on the grounds that they were all Islamists) with the Gulenist gangs who were rising in revolt against constitutional rule and opening murderous fire on the people of Turkey. Moreover, in the final analysis what happened was not reducible to a fight between the AKP and the Gulenists. In general, all army takeovers target some existing government in order to establish their hegemony over society. This was also the case with the recent uprising that was intended to topple the AKP.

Seen in this light, 15th July was the Gulenist junta’s attempt to take Turkish society prisoner as a whole. And society for its part also resisted this treasonous attempt as a whole. All political parties and the entire media aligned themselves with the government against the coup. Not a single group applauded the putschists. Not a single social group greeted them with open arms.

Victory in Turkey on 15th July went to democracy and all of society.