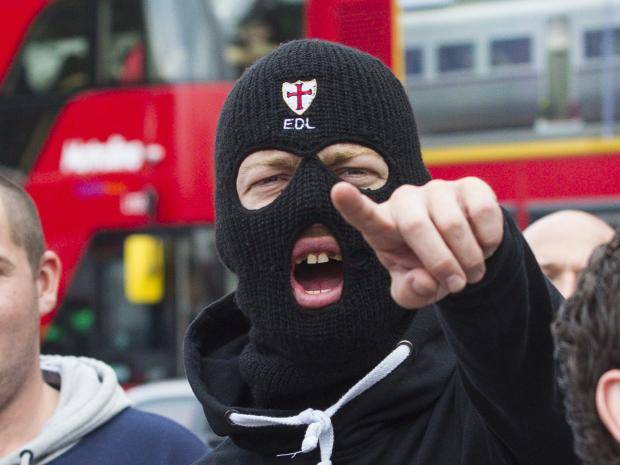 Far-right extremists are preparing for what they believe is a “war against Islam”, a report has warned in the wake of police alerts over attempted attacks.

Nick Lowles, chief executive of the campaign group, said that with the combination of “civil war” rhetoric and growing online hatred, “we must be prepared for more terrorist plots and use of extreme violence from the far-right for the foreseeable future”.

“There is a huge spectrum of people but they all believe in this coming conflict,” he told The Independent.

“Some say the only way to stop it is by people like themselves doing something about it, because they believe the state has allowed this to happen through multiculturalism and integration.”

Mr Lowles said a smaller number of extremists believe a war against Muslims “needs to happen” so they can be expelled from Europe.

He was speaking days after Mark Rowley, the outgoing head of UK counter-terror policing, revealed that four far-right terror plots had been foiled since the Westminster attack in March 2017.

Mr Rowley said 10 Islamist plots were foiled in the same period, warning that both sides were “executing a common strategy” by exploiting existing grievances in target communities, generating distrust of state institutions and then “offering warped parallel alternatives”.

A record number of people are being arrested for suspected terror offences in the UK, with 28 suspects detained for far-right-inspired crimes in 2017 according to Hope Not Hate’s count.

The vast majority of terror suspects are alleged Islamists, but the number of white suspects has rocketed and far-right extremists make up more than a quarter of those going through the Government’s Channel counter-radicalisation programme.

Hope Not Hate said that while anti-Semitism is still pervasive in the far-right, recent years have seen traditionally fractured groups rally around specifically anti-Muslim ideas in the wake of 9/11 and Isis terror attacks.

Its report said that the view of Islam itself as a threat had spread into the mainstream and the general British population, with more than half of respondents in a public poll taking the position and 42 per cent saying their distrust of Muslims had grown after last-year’s Isis-inspired attacks.

“With increasingly negative views towards British Muslims – and Islam more generally – there is a growing pool of possible recruits for the far right and, with some now having huge social media platforms, they now have ways to reach people that were unimaginable in the past,” researchers found.

All have seen followers and views spike in the wake of Isis-inspired massacres, with campaigners accusing the far-right of “exploiting terror attacks for its own benefit”.

Because most of the material posted by high-profile figures cannot be proven to call for violence, it has mostly evaded criminal law and guidelines on social media sites.

“While these people are not directly inciting violence, it is the logical conclusion of their rhetoric,” Mr Lowles said.

“With the upsurge in terrorism coupled with the growth of far-right online and their ability to spread their poison to far larger numbers than ever before, we shouldn’t be surprised that people act on it.”

One example is Darren Osborne, the far-right terrorist who was jailed for life after ploughing a van into Muslim worshippers in Finsbury Park, killing one victim and injuring several others.

Records presented to the jury showed that the father-of-four started gorging on material from sources including the far-right party Britain First and Robinson after watching a BBC documentary on grooming gangs.

Police said the 48-year-old became radicalised in just three to four weeks, as he read messages including an automated email from Robinson’s Rebel Media website claiming a “nation within a nation was forming just beneath the surface of the UK”.

“The government and politicians refuse to take the necessary steps to keep us safe,” said the message, which was calling for supporters to join a march.

“It has now been left to us, the ordinary people of the United Kingdom to stand up to hate, to unite and in one voice say ‘no more’.”

Osborne planned his attack after reading tweets from anonymous posters calling on people to “fight”, while a note left in the van claimed “Islam’s ideology doesn’t belong here”.

Following previous warnings about online radicalisation by Isis and other Islamist groups, police said “individuals could look at material today and decide to go and do an attack later on this evening”.

Last month, a Britain First supporter was jailed for trying to mow down the owner of an Indian restaurant after saying he was going to “kill a Muslim”, while a neo-Nazi was convicted of planning to attack a gay pride event and a Hitler-obsessive was imprisoned for threatening to petrol bomb mosques in revenge for the Manchester attack.

Several terror cases involving suspected neo-Nazis are progressing through courts, including alleged plots to attack Downing Street and assassinate a Labour MP with a machete.

The 2018 State of Hate report named numerous active groups of neo-Nazis, white supremacists, Holocaust deniers and figures on the so-called alt-right, which is based in America.