Ana Sayfa Haberler Çeviriler Putin is brandishing his new arsenal — but what does Russia have?
Facebook
Twitter
WhatsApp 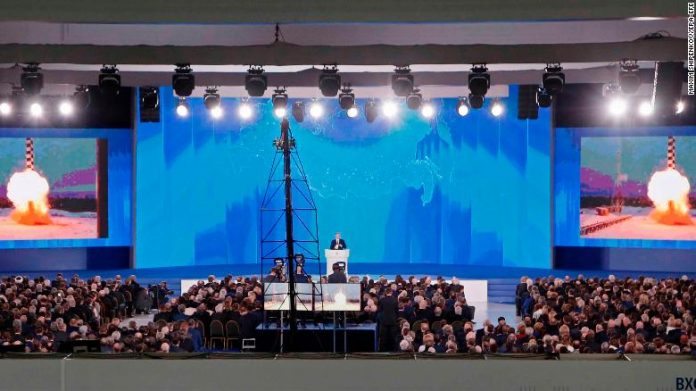 Moscow (CNN)Russian President Vladimir Putin has raised hackles in Washington with his claim — unveiled Thursday — that Russia is fielding a formidable new arsenal that can thwart US ballistic missile defenses.

So what new strategic weaponry does Russia have, and how does this it enhance its military power? And does this mean a new Cold War is in the offing?

Here are the basics about the new weaponry revealed by Putin as he gave his annual address to the Russian Parliament.

A new generation of intercontinental ballistic missile: The Sarmat would be a more capable rocket designed to replace the Voevoda ICBM, known by the NATO designation SS-18 Satan. It could loft its payload over a longer distance — capable of crossing the South Pole as well as the North Pole, the shortest route between Russia and the United States.

Is it deployed? No. Putin said the Russian military has begun the "active phase" for testing the new missile. Russian state news agency RIA-Novosti Friday cited a Russian lawmaker saying pre-production versions of the rocket would enter the inventory soon.

A nuclear-powered cruise missile: Putin boasted that the Russians had developed a low-flying cruise missile capable of carrying a nuclear warhead that could stay aloft indefinitely: It would be powered by a nuclear power plant.

Is it fully operational? No. At the end of 2017, Putin said, Russia conducted a successful launch of the missile.

Fully operational? Apparently. Putin said the system — called Kinzhal, or Dagger — had successfully completed testing and had been deployed operationally beginning on December 1 at the airfields of Russia's Southern Military District.

A hypersonic glide vehicle: Putin said Russia had developed a missile system with a weapon capable of flying "like a meteorite" at several times the speed of sound.

So does this mean a new Cold War-style arms race is underway? According to Dmitry Peskov, Putin's spokesman, no.

"The President noted that this can in no way be considered as the start of an arms race, because it's nothing but a Russian response to the breaking of the ABM treaty," Peskov told reporters Friday, referring to the decision by former US President George W. Bush to withdraw from the 1972 Anti-Ballistic Missile Treaty and deploy missile defenses.

That grievance is nothing new. But observers are still worried.

In comments Thursday on Twitter, Dmitri Trenin, the director of the Carnegie Moscow Center, said: "Giving half the time in the annual address to the Russian parliament to a graphic description of new weapons' capabilities is a measure of how close the US and Russia have moved toward military collision."

He added: "For the foreseeable future, it looks that the US-Russia agenda will be limited to just one item: war prevention. Good luck to us all."