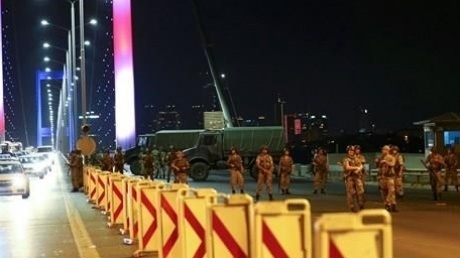 The Turkish original of this article

When I listen to some of Turkey’s “educated leftists” I regret our last desperate fifty years of failure. My disappointment mounts when I hear them insisting that “the 15th July coup attempt was nothing but a show, a theatre act staged by Erdogan.” I keep encountering such arguments from all sorts of people, ranging from café waiters to freelancers writing for the international media. Clearly the Western public, too, having sought refuge behind the “nothing but a show” interpretation right from the start, keeps deriving some kind of smug satisfaction  from propagating such commentaries.

As the nation kept resisting

The early hours of 16th July, 02:00 to 03:00 am. The National Assembly is being bombed from the air. Around 100 MPs are there — from all four parties represented in parliament. The bombing continues incessantly. Screams are heard from inside the parliament building. In Istanbul, citizens who have taken to the streets are throwing themselves in front of the tanks to block their way with their bodies. The junta’s troops are pouring fire on them, killing almost 200 civilians. The footage from the Bosphorus Bridge provide absolute proof of how the people defied death to oppose the coup. The masses keep resisting, politicians keep resisting. Eventually, an enormous catastrophe is narrowly averted though at huge cost. The country has stood together,  including its parliament, all its secularists and Islamists, its media, its men of religion who called on everyone to rise and resist from mosques and minarets, its police, its troops that did not join the coup, its commanders who refused to sign the junta’s declaration. In the Grand National Assembly, all four parties, representing 97.44 % of the national vote, release a joint statement: “Our nation has opposed and prevented this bloody coup attempt, providing an example to the whole world.”

From all the “show” talk to some hard facts

So let’s look at all this on the basis of what used to be our good old leftist criteria. The entire people are resisting, with all the institutions at their disposal. So if we are going to look to “the people” as our criterion, their attitude is unambiguous. Yes, here and there we do see things that must be criticized. Some speeches keep exacerbating the tension. Others exhibit authoritarian tendencies. We need more maturity of language and attitude, we need democracy to be more internalized. We also need critical thinking, and people who can think outside the box without arrogance. Now is the time to treat our wounds, and to transform this immense shock into an opportunity for developing and improving democracy.

A real possibility has finally arisen of reaching some kind of consensus over changing the system so as to get rid of military tutelage. At the very least, there are some indications in that regard. As for those who think they are in some kind of “theatre,” it wouldn’t be too bad if they too were to come down from their imaginary “stage,” and to leave their pride behind in joining the people.