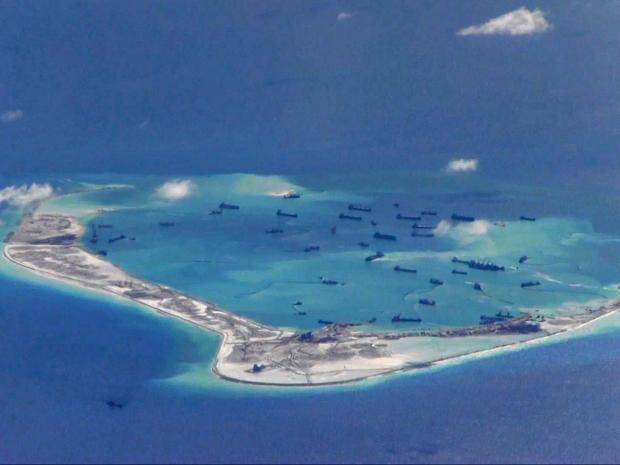 Chinese dredging vessels are purportedly seen in the waters around Mischief Reef, in an image taken by an American P-8A Poseidon surveillance aircraft REUTERS

China has condemned America for a "serious political and military provocation" after a US Navy destroyer sailed within 12 nautical miles of an artificial island built in disputed waters.

The operation in the South China Sea was the latest attempt to counter what Washington sees as Beijing’s efforts to limit freedom of navigation in the strategic waters.

It came amid heightened tensions between the two nations, after Donald Trump announced plans to impose tariffs on up to $60 billion (£42 billion) in Chinese goods, moving the world’s two largest economies closer to a trade war.

The USS Mustin warship travelled close to Mischief Reef in the Spratly Islands and performed manoeuvres, US officials, speaking on condition of anonymity, told the Reuters news agency.

China's Defence Ministry said its navy sent two ships to identify the US destroyer and warn it to leave.

“What the US is doing will damage the military-to-military relations and atmosphere,” a spokesman said. “It could easily cause misjudgments and accidents at air or sea. This is a serious political and military provocation

"We demand the US side earnestly respects China's sovereignty and security and the strong wishes of countries in the region to protect peace, stability and tranquility, and not make trouble out of nothing and stir up havoc.

"The provocative behaviour by the US side will only cause the Chinese military to further strengthen building up defence abilities in all areas."

In a separate statement, China's Foreign Ministry said the country would take all necessary steps to protect its sovereignty and peace and stability in the South China Sea. It accused of the US of seeking to "manufacture tensions" in the region.

The US military has a longstanding position that its operations are carried out throughout the world, including in areas claimed by allies, and they are separate from political considerations.

"We conduct routine and regular freedom of navigation operations, as we have done in the past and will continue to do in the future," said Lieutenant Commander Nicole Schwegman, a spokeswoman for US Pacific Fleet.

However, the latest operation, the first since January, is likely to raise tensions just a day after President Trump signed a presidential memorandum that will target Chinese goods with tariffs.

The US has criticised China’s construction of islands and build-up of military facilities in the sea, and is concerned they could be used to restrict free nautical movement.

China’s claims in the South China Sea, through which about $5 trillion (£3.5 trillion) in ship-borne trade passes each year, are contested by Brunei, Malaysia, the Philippines, Taiwan and Vietnam.

The US military has put countering China and Russia at the centre of a new national defence strategy.

China’s navy is to carry out combat drills in the South China Sea, the military’s official newspaper reported, describing the move as part of regular annual exercises.

Taiwan’s defence ministry said this week it had shadowed a Chinese aircraft carrier group traversing the Taiwan Strait in a south-westerly direction into the disputed South China Sea area.