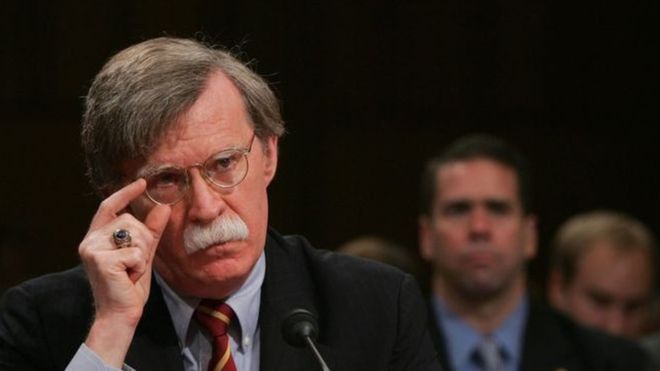 The famously hawkish Bolton will become part of a new trio advising and guiding Trump as he navigates unprecedented talks with North Korea, his possible departure from the Iran nuclear deal, and increased tension with Moscow and Beijing.

Haspel remains something of a cipher to the public, but Pompeo's tenure as a lawmaker established him as a hardliner who advocated for bombing Iran even as negotiations on the international nuclear deal were ongoing.

That history, along with Bolton's advocacy for military interventions in North Korea and Iran, his dismissal of diplomacy and disdain for international law, has led some to warn that Trump will now be surrounded by the most hardline team to shape US foreign policy in years.

The world reacted with caution and some dismay.

In one quarter, there was warm praise.

But at the UN, the place where Bolton is perhaps best known because of his tenure as ambassador from 2005 to 2006, officials chose their words with extremely diplomatic care, with some issuing veiled warnings about the need to defend the institution and its cooperative, collaborative ideals.

Richard Gowan, a UN analyst at Columbia University, had an explanation. "The UN is in considerable trouble," Gowan said. "Bolton does not merely dislike the UN. He knows the organization rather too well for comfort."

"A club for people to get together"

With Trump already pre-disposed to dislike the UN — he referred to it as "just a club for people to get together, talk and have a good time" — Gowan said Bolton could deepen cuts the Trump administration has already made to its regular budget and peacekeeping operations and perhaps go even further.

"He will likely press [US Ambassador to the UN Nikki] Haley and Pompeo to find ways to weaken the UN quite drastically and decisively," Gowan said, "rather than merely trimming its budgets."

A UN Security Council diplomat hedged on Pompeo's impact at the State Department, but added, "an appointment of John Bolton … that would change the question."

UN diplomats were more careful on the record. Spokesman Stephane Dujarric, who defended the institution against some of Bolton's broadsides in 2006, said Friday that UN Secretary General Antonio Guterres "had developed a very constructive and positive relationship" with outgoing national security adviser H.R. McMaster. "and he looks forward to continuing that relationship with Ambassador Bolton."

Reporters asked Dujarric to respond to some of Bolton's more pointed criticisms of the UN. The lawyer and Fox News commentator has said there's "no such thing" as the United Nations, that if the headquarters lost 10 stories, it wouldn't make a difference, and that it would be a mistake to grant validity to international law.

"Look, we will leave analysis of past statements to journalists and historians," Dujarric said. "We're not going to speculate about the future, we're dealing with the present. And as I said, the secretary general looks forward to continuing the kind of relationship he had with the national security adviser with the new one."

When asked about Bolton's appointment, Sigrid Kaag, the Netherlands' minister of foreign trade, told reporters that, "we remained firmly anchored in multilateralism as a way to solve most burning and pertinent issues today, in the past, and in the future."

UK Deputy Ambassador to the UN Jonathan Allen was asked if Bolton's appointment was going to test multilateralism, given his hostile views.

"The US and the UK have long been close allies and friends," Allen said without mentioning Bolton's name. "That will continue and endure."

Among Asian allies, dealing with an increasingly assertive China, the prospect of a trade war as Trump levies tariffs against Beijing, and an unpredictable North Korea, there was some concern.

Bolton's views on Pyongyang were most recently on display in a February 28 commentary that laid out what he called a "perfectly legitimate" case for a pre-emptive strike against North Korea. It used an example from 1837 as the basis for his justification and made no mention of the thousands of Americans and hundreds of thousands of Koreans who would die in the event of a US military attack and North Korean reprisal.

Kim was among many observers who worried about the repercussions if planned May talks between Trump and North Korean leader Kim Jong Un don't go well.

"If Bolton takes office and talks with North Korea go haywire and yield bad results, I don't know what we'll do then," Kim told Reuters. "Any turns in a negative direction could mean all our work over the years to engage North Korea could turn to dust."

Japanese Foreign Minister Taro Kono said he was "a bit surprised" that former national security adviser H.R. McMaster was out, given that he'd just met him the week before in Washington. That said, Kono told the Japan Times that he didn't expect big changes given the "complete agreement" between Washington and Tokyo.

Japan's Chief Cabinet Secretary, Yoshihide Suga, offered the Japan Times a very careful and caveated assessment. "We have been closely exchanging views with the US government, both between leaders and at the working level, so we don't think there will be any particular negative influence."

There was no reaction from North Korea, which in 2003 felt free to blast Bolton as "human scum" and a "bloodsucker."

In 2006, Bolton was working with the Security Council on North Korea resolutions after illegal missile and nuclear tests. At one meeting the North Korea representative walked out on the Council, which Bolton compared to former Soviet leader Nikita Krushchev pounding his shoe on a desk in the General Assembly when upset.

Middle Eastern reaction was clearly divided. Across the region, countries are waiting to see whether Trump will walk away from the nuclear deal with Iran on May 12, the day he has to continue to waive sanctions on Tehran or pull the IS out of the agreement. Trump has set that day as a deadline for US and European negotiators to find a way to change the deal.

In Iran, the spokesman of the powerful Guardian Council pointed to Bolton's ties with a group that opposes the government in Tehran, and said it showed Washington's continued support for terrorist groups operating against Iran. "Now the question is why Bolton has been assumed to a sensitive position," he wrote in a piece for the semi-official Fars News service.

But in Israel, Bolton's ascension was greeted as happy news. Naftali Bennett, a member of Prime Minister Benjamin Netanyahu's security cabinet, hailed Bolton as "an extraordinary security expert, experienced diplomat and a stalwart friend of Israel."