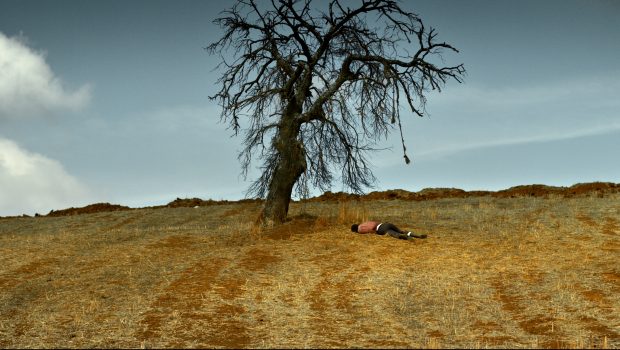 Four years after his previous film, Nuri Bilge Ceylan’s Ahlat Ağacı finally premiered at the Cannes Film Festival in May.  After the previous awards Ceylan garnered at Cannes, and especially after Bir Zamanlar Anadolu’da (Once Upon a Time in Anatolia) was awarded the Grand Prix in 2011, and Kış Uykusu (erroneously translated as Winter Sleep; it should actually be called Hibernation in English) received the Palm D’or in 2014, Ahlat Ağacı’s failure to win an award at the world’s most prestigious film festival was disappointing.  Ceylan’s film then entered Turkish theaters on 1st June.

I’ve seen Ahlat Ağacı only once, but I’m looking forward to the DVD’s release as it is a film that will demand repeated viewings in order to grasp the finer details of its meaning and aesthetics.  Ahlat Ağacı is worth the three-hour viewing time and seems to be a work of art that will grow on me and reveal new dimensions as I watch it again and again in the future.

The best place to start is with a comparison with Ceylan’s recent films, and then an exploration of the film’s title.  Ahlat Ağacı is not as immediately accessible as Kış Uykusu because it returns to the profoundly cultural character analyses of Bir Zamanlar Anadolu’da.  Kış Uykusu is an allegory constructed around the primary class elements of Turkish society, and the behavior, attitudes, weaknesses, and hypocrisies displayed by each.  As such, it is relatively easy to understand, and I am tempted to think that that clarity contributed to its reception at Cannes.

Bir Zamanlar Anadolu’da, on the other hand, delves into the character types found in Turkish society, and their motivations and mentalities.  Yes, there are allegorical aspects to the film, such as the near-genius sequence in the film’s final thirty minutes, but its essence is the socio-psychological exploration of Turkish society.

Ahlat Ağacı continues Ceylan’s socio-psychological portraits of Turkish society, but in a different area of Anatolia — Ceylan’s home region of the northwest, bordered by Çanakkale, Troy, the Kayacı Mountains, and Mount Ida (Kazdağı).  The history and sociology of this area is different than Central Anatolia, and types or patterns of behavior are also different.

The title comes from a species of pear tree found in Anatolia, but the name itself also provides a variety of perspectives through which the film can be analyzed.  Before the film’s release, I hadn’t heard of this particular tree, so I turned to the Türk Dil Kurumu dictionary to see what it was.  Once I saw the explanation I understood some of what Ceylan was aiming at.  The dictionary provides two separate explanations for the word ahlat, with slightly different pronunciations.

The first word comes from Greek and refers specifically to the wild pear tree.  As the dictionary explains, the wild pear, Pirus piraster, can only be eaten once it is fully ripe, matured.  The same word is also slang for a rude, ignorant person.  Both of these definitions are obviously relevant to the film’s main character Sinan, his father, İdris, and his grandfather, Ramazan. Then the dictionary includes a proverb: “a good wild pear is eaten by the bears in the mountains,” which is used to refer to people who have somehow come to possess a good thing that they don’t really deserve.  The action largely take place in the hills and mountains surrounding Çan, the small town that provides the film’s main setting.

The second word, ahlât, comes from Arabic, and is the plural of hilt.  The difference in pronunciation means only that the syllables are emphasized differently and the final vowel is slightly longer, so the difference between the two ahlats is quite small.  Both definitions provided by the dictionary for the Arabic ahlât fit the film exactly:  the first refers to the different parts that constitute a mixture; the second refers to biology and the parts that make up a body, forming an organic whole.  Both definitions clearly apply to the characters in Ahlat Ağacı, which are representative types found in Turkish culture, and should be understood as important aspects present in the mixture that Turkish society comprises. The characters are thus meant for the viewer as embodiments of their mentalities, desires, problems, sociological bedrocks, and places in Turkish society.

Finally, two other Turkish words have pronunciations that are brought to mind by the word ahlat.  The first is evlat, again from Arabic, which really means children, plural, but has come to be used in Turkish for child, singular. Because the film focuses on family relations, especially the father-son nexus, evlat seems to resonate well with some of its basic themes.  The second word is ağlat, a Turkish word meaning “to make to cry”; ağlat elicits the profound sorrow reflected in the film’s content, especially by its heart-wrenching end.

One last point needs to be added:  the main character, Sinan, has written a book with the title Ahlat Ağacı. The film’s plot is actually driven by Sinan’s various attempts to find a way to publish the book.  The shared title suggests that the film may be the cinematic version of the book.  Sinan’s name brings to mind the most famous Ottoman architect of all, who rose from obscure (Greek? Armenian?) origins, through the janissary corps, into the lodge of royal architects. One wonders if this was deliberate on Ceylan’s part, but in any case, the film’s Sinan (too?) is trying to carve a path for himself through literature.

More emphatically, Sinan’s personal struggle strongly suggests an autobiographical element.  Ceylan grew up in a small town slightly to the east of Çan, which is a one-hour bus ride east of Çanakkale (on the Dardanelles) over the Kayacı Mountains.  That is the area of Turkey that classicists refer to as the Troad, using a Greek word originating from the Hittite language. It also features the ruins of Troy, a thirty-minute drive south of Çanakkale.  Ceylan’s home town is called Yenice, and he had to start from the bottom, with no help whatsoever, to make his own name in Turkish cinema. This is perhaps echoed in the way Sinan is trying to break out through literature.