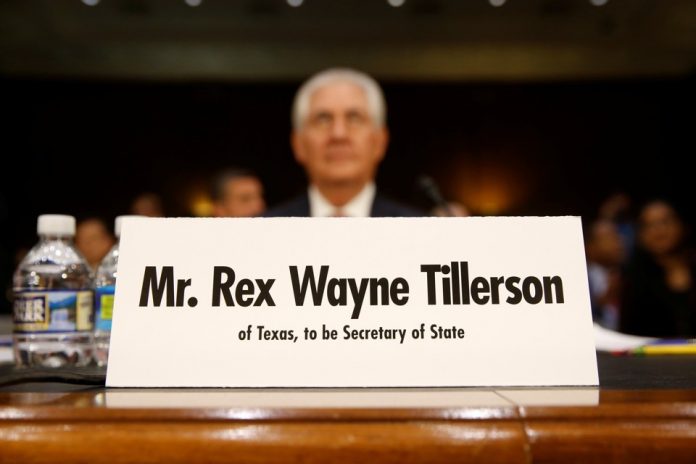 This past Wednesday featured the spectacle that many of us foreign policy buffs had been waiting for:  the U.S. Senate confirmation hearings for president-elect Donald Trump’s aecretary of state nomination, Rex Tillerson. Tillerson, a career oilman who is, by all accounts, on extremely chummy terms with Russian president Vladimir Putin, was expected to get a chilly reception from even the Republicans charged with questioning him.  Something like an interrogation was expected.

Naturally, Tillerson fielded inquiries on a wide variety of subjects connected to “the vast external realm” (1), and notably, Tillerson provided opinions that differed from those of Donald Trump on several key issues (2).  For the first time, we now have some material for trying to anticipate how the Trump Administration may conduct U.S. foreign policy.

But in Turkey all were anticipating his responses related not only to issues directly concerning this country, but to all issues in the broader region, which has seen a serious breakdown in political order during the Obama Administration.  A first major point is that Tillerson hinted at a different, somewhat less chauvinistic attitude towards Muslims than Trump, and gave only cautious and qualified support to the idea of forcing U.S. Muslims to register (3).  Secondly, Tillerson expressed stronger condemnation for Russian actions in Ukraine and Crimea than the Obama Administration (let alone Donald Trump), but balked at accepting the label of “war criminal” for Putin (4).  Tillerson also voiced a stronger commitment than Trump to American responsibilities under NATO’s Article 5.  Overall, Politico termed Tillerson’s performance “shaky,” and suggested that his nomination was by no means secure (5).

Tillerson opened his session by reading a prepared statement that touched on topics of direct concern to Turkey.  His remarks included the following lines:

Our NATO allies are right to be alarmed at a resurgent Russia.  But it was in the absence of American leadership that this door was left open and unintended signals were sent.  We back-tracked on commitments we made to allies.  We sent weak or mixed signals with red lines that turned into green lights.  We did not recognize that Russia does not think like we do. … Where important differences remain, we should be steadfast in defending the interest of America and her allies.  Russia must know that we will be accountable to our commitments and those of our allies, and that Russia must be held to account for its actions.  (6)

Tillerson admits that recent U.S. policy towards Russia’s security cordon has been wishy-washy, and, at times, spineless.  Those comments will ease some of the concern about the new administration’s approach to Russia and Turkey’s region.  On the other hand, those are only statements to a panel tasked with grilling a candidate chosen for an important government position.  What the result will be when we get to actual policy-making can only become more concrete with time.

From my end, the most important comment that Tillerson provided was something that actually gave me some relief, though it wasn’t included in the coverage provided by the NYT, Politico, Slate, or even the Guardian.  When asked about his approach to the conflict in Syria, Tillerson responded that the U.S. needed to “re-engage with our traditional allies and friends in the region.” He further added:

We have to re-engage with President Erdoğan in Turkey, this is a long-standing NATO ally. Due to the absence of U.S. leadership, he got pretty nervous about the situation. He has turned to his next available ally, he has turned to Russia. To make it clear to him, this is not a sustainable ally. Your sustainable alliance is with the United States. (7)

Until that statement, we had very little material with which to judge the Trump Administration’s future policies towards Turkey, and Tillerson’s statement was heartening.  But Tillerson’s further statements on Syria indicated that he and President Trump would land themselves in the same predicament that Barack Obama, John Kerry, and Ben Rhodes have got themselves into during the past four years.

During the discussion on Syria, Tillerson was naturally asked what his strategy towards dealing with the situation there would include, specifically in the struggle against DAESH.  Unfortunately, Tillerson responded that

… in order to defeat the imminent threat posed by Daesh the U.S. should use the forces that are already there, including the YPG [which he described as great U.S. allies], and recommit to them by supporting them with new capabilities to advance on Raqqa. (8)

This is exactly the same mistake committed by the Obama Administration over the past four years.  The YPG is, of course, organically connected to the PKK, a violent militant group designated as “terrorist” by the U.S., E.U., and Turkey.  Since 1985-86, PKK violence has claimed the lives of tens of thousands of Turkish citizens, and has re-intensified during the past eighteen months.

The latest installment in the U.S.’s baffling — and, to Turkish citizens, infuriating — effort to camouflage its support for an extension of the PKK occurred on Wednesday when CENTCOM (U.S. Central Command) tweeted a statement from the U.S.-backed SDF claiming that it has no ties with the PKK (9).  This was instantly and widely mocked by Turkish twitter users, and the Spokesman for Turkey’s Presidential Office reacted with outrage (10).  So, if Tillerson truly wants to reconstruct U.S. relations with Turkey, he’s going to have to change his tune on that issue.  If the new administration does not clearly and definitively stop cooperating with all PKK subsidiaries, they will have no more luck winning Turkish hearts and minds than the Obama Administration has had in the past four years; indeed they may end up pushing Turkey to deepen its ties with Russia.  Needless to say, such an event would be highly damaging to the U.S.’s long-term interests in Southwest Asia and the Eastern Mediterranean.

Assuming that Tillerson is confirmed, one of the first items that observers should focus on is the level and quality of communication between the Secretary of State and President Trump.  How involved will Trump actually be in formulating U.S. foreign policy?  From Trump’s behavior during the campaign, and his tendency to substitute tweeting for more formal and established methods of communication, one gets the impression that Trump might make very little direct input into U.S. foreign policy decisions and implementation.  For example, Slate’s Joshua Keating noted that Tillerson, “Asked if he had any contingency plan if Trump goes rogue… replied, ‘I have his cellphone number.  He’s promised me he’ll answer.’” (11)  That answer, impossibly flippant as it is, nevertheless conveys the impression that Tillerson will be highly independent in his pursuit of America’s interests abroad.

(1) This characterization of the stage upon which foreign affairs are played out was coined by U.S. Supreme Court Justice George Sutherland, in the majority opinion provided for the 1936 case United States v. Curtiss-Wright Export Corp. 299 U.S. 304: https://supreme.justia.com/cases/federal/us/299/304/case.html.