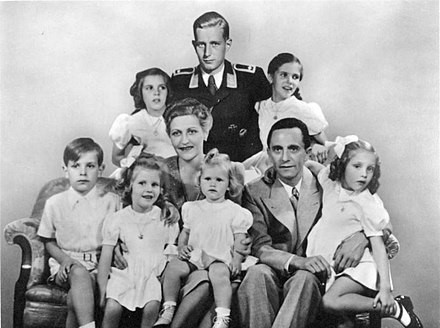 [9th May 2021] While we are on this topic of World War II and the end of the Third Reich (which, it was said, would live for a thousand years, but lasted only twelve)  — can you kill your own children? Who can kill their own children? Small and innocent children at that — the youngest just 4, the oldest only 12?

Magda and Joseph Goebbels did it, back on 1st May 1945. Look at the picture above. It was taken somewhere between 1940-1942. The young officer at the top is Harald Quandt, Magda’s son from a previous marriage. He wasn’t there when this picture was taken, but later inserted and retouched. A Luftwaffe pilot who was later captured by the Allies, he was in a POW (prisoner of war) camp when the war ended. No war criminal, after being released he went on to become a successful West German businessman.

On either side of Harald in the back row are the two oldest girls, Helga (right) and Hildegard (left). In front, from left to right are Helmut, Hedwig, Heidrun (the youngest) on her mother’s lap, and Holdine hugging her father. Charming kids, aren’t they? And what a lovely, loving family photograph!

If you were shown this at random, without any previous knowledge of who or what they were, you couldn’t possibly imagine what then happened. The man on the right was a rabid Nazi, a vitriolic racist and anti-Semite, publicly committed to what we today call the Final Solution, a dyed-in-the-wool kind of Machiavellian liar, and utterly devoted to Hitler, while all his beliefs were shared by his wife in the middle. He had become his beloved Führer’s Minister for Propaganda. They had lived through a triumphant decade, but now the end was near. Experts on Nazism say that the couple may have discussed suicide and the fate of their children during a long night-time conversation on 27th January 1945. Joseph knew what the rest of the world thought of everything they had done and were still doing. As for Magda, there is some evidence that she was talking about killing her children at least a month in advance — because she did not want them to grow up hearing that their father had been one of the century’s foremost criminals. In itself, this insight into their inner world is both interesting and maddening. It is infuriating because it shows that they knew. It points to a dual or double consciousness: on the one hand, reality and self-perception in ordinary human terms, and on the other, a second, alternative reality created by the faith they professed and seemed to believe.

As everything was collapsing around them, ultimately it was recognition and acceptance of the first but the impossibility of living with it that led them to a last and most terrible murder. Goebbels burned his private papers on 18th April, and as I wrote yesterday, they all moved into the Führerbunker on the 22nd. He refused Hitler’s orders to leave, and she refused all offers (including Albert Speer’s) to take the children out of Berlin. Why? How can any parents not want their children to live? Was a world without National Socialism so hateful to them? Rochus Misch, the Führerbunker’s radio and telephone operator, subsequently testified to the Allies that late on 1st May, he had watched as their mother combed their hair and kissed them, all wearing nightgowns as it was close to their bedtime. Available on Wikipedia, it is a harrowing story. Heide, the youngest, had scrambled up onto the table. Helga, who was the oldest and whom Misch called the brightest of the children, was “crying softly” just before bedtime and wore a glum expression. The others seemed unaware of the impending danger. But Helga was 12 going on 13, and seemed to sense that the adults were lying to her about the outcome of the war; in fact she had been asking what would happen to them. Misch felt Helga had little fondness for her mother. Magda had to push Helga towards the stairs that led up to the higher level of the bunker. Four-year-old Heide, who had tonsilitis and wore a scarf around her neck, turned back to look at Misch, giggling, and teasingly said, “Misch, Misch, du bist ein Fisch” (Misch, Misch, you are a fish) just before her mother led her and her siblings upstairs.

After that, nobody saw them alive — except for their parents and the two doctors they called in. An SS dentist, Sturmbannführer (major) Helmut Kunz, quickly came in and on the pretext of inoculations for an intended trip, injected all six with morphine. When they were unconscious, another SS physician, Hitler’s personal doctor Oberstırumbannführer (lieutenant colonel) Ludwig Stumpfegger provided the cyanide ampules which Magda Goebbels crushed in their mouths to kill them.

Afterwards, Joseph and Magda Goebbels left the bunker around 20:30 and walked up to the garden of the Chancellery, where they committed suicide. Their only half-burned bodies were left out in the open, where they were discovered by Soviet troops the very next day. On 3rd May 1945, the Soviets descended into the bunker, finding the children in their two-tiered bunk-beds, dressed in their night clothes, and with ribbons tied in the girls’ hair. During the autopsy, bruises were found on Helga’s face, feeding speculation that she may have tried to resist taking the cyanide.

What was Nazism all about? What levels of inhumanity could it trigger in its adherents? Even with the concentration and death camps, this probably says it better than anything else.

For the original posting of this article, click https://hist.ihu.edu.tr/en/halil-berktays-diary/.