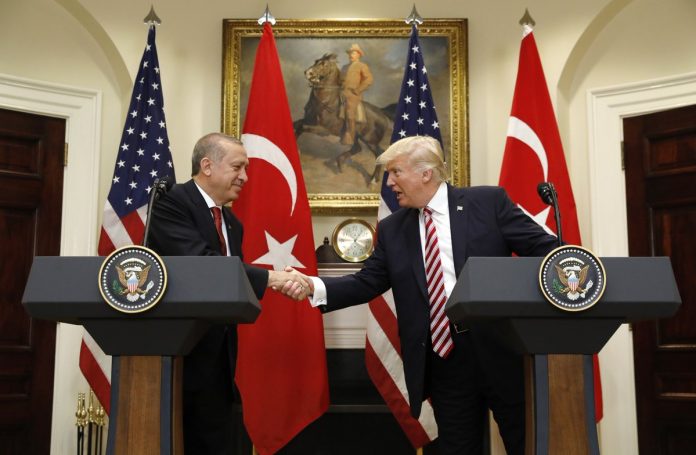 On Tuesday, 16th May, Turkey’s President Erdoğan stopped by Washington D.C. during his around-the-world journey that also included a stop in Beijing.  Though President Erdoğan stayed in Washington for barely more than 24 hours, his activities included lunch with President Trump at the White House and then meetings with leaders from the U.S. business community and civil society.

Though President Erdoğan’s appearance in Washington is clearly important, whether he obtained concrete results from his meeting with President Trump will only become clear with time.  According to some reports, the meeting between the two leaders lasted only twenty minutes, leaving little time to explore in detail any of the many issues currently plaguing the two countries’ relationship.  After the presidents met, meetings between delegations from both sides convened to work on specific issues, but few details have emerged about the content of these discussions.

Naturally, I hope that solid progress was made on topics important to both sides, especially on the Gülen extradition, trade, and the situation in Syria.  However, I should say that I’m not very hopeful.  Here’s why:

President Trump is entirely engulfed in scandal.  The controversy surrounding his firing of FBI chief James B. Comey and the investigation into his relations with Moscow must be occupying most of Trump’s time and attention.  And even under the best of circumstances it’s difficult to imagine Trump having any sort of intricate knowledge about U.S. relations with Turkey.  Because he lacks that information, it means that the real decisions will be left to others.  Secretary of State Rex Tillerson was present for the meetings with the Turkish delegation, as were representatives from the Pentagon — and Jared Kushner, who many see as the primary influence on Trump’s foreign policy decisions.

But the State Department still has not asserted any command over U.S. foreign policy under the new administration.  Jared Kushner’s true interests and expertise are cloudy.  In Turkey’s region, the Pentagon remains the primary U.S. decision-maker, as it has been since the end of the Obama Administration.  In other words, on matters of foreign policy, it is highly doubtful that important changes will result from the 16th March meetings, which is why observers have begun to focus more on possible deals, largely under the Pentagon’s control, between the two sides.

The comments from Erdoğan and Trump after the meeting did nothing to change this appearance.  Both men said little of real substance, sticking mostly to diplomatic pleasantries.  Trump could not pronounce President Erdoğan’s name correctly.  In fact, his pronunciation was so far from being accurate that it seemed no one had coached him on how to say the name.  Trump’s version of Erdoğan’s name was that of any American suddenly confronted by an unfamiliar foreign name, so he went with what seemed right or “normal.”  The only interesting comment from either leader was President Erdoğan’s mention of “the foundations of a new era” between the two countries, which he stated had been laid during the day’s discussions.  Time will tell whether Erdoğan’s words were simply political rhetoric or an indication that something concrete had been achieved.

The coverage on Turkish TV’s late-night political discussion programs was intense, with the footage taken at the White House repeated over and over, but nothing precise could be said.  Because the information that the public had access to was limited, most commentary had to range into creative speculation.  Consequently, the only thing that observers can do is closely watch developments in the coming weeks.  If tangible changes are to be set in motion, they will be immediately obvious, whether in the U.S. attitude towards the PYD/YPG, towards Gülen’s extradition, or on trade.  But I’m not holding my breath.

Right now it is unclear whether the Trump Administration has even the most basic ability to formulate and implement policy. Nearly every week since Trump’s inauguration some sort of major political problem has emerged, and especially foreign policy has been hamstrung as a result.  Whether one sees these political scandals as conspiracy against Trump or not, the result is the same.  With so many chefs obviously doing their best to spoil the broth, one should not expect stable, predictable foreign policy decisions from this administration in the near future.

So I’ll reiterate what I said two months ago (1) — at least in the near term, Turkey is on its own in the immediate region.  Russia, in a finger-in-the-eye sort of manner, now has its flag fluttering on the Turkish-Syrian border.  The Pentagon is busy arming and training a violent Marxist-Leninist extremist group (the PKK’s Syrian branch, the PYD/YPG) for the push against Raqqa.  The PYD meanwhile is busy consolidating its demographic and political hold over its north Syrian cantons.  The al-Assad regime continues to strike deals with the PYD (and with Daesh) whenever it sees fit.

Elsewhere, violence keeps flaring up between Armenian and Azeri forces in Nagorno-Karabakh, and it’s no secret which regional state arms and trains the Armenian military. Russia even has military bases in that country, and the security services are hugely Russian controlled.  Through ties to the PKK, to Damascus, and to Moscow, Iran seems set on securing a political and economic corridor to the Mediterranean.

The entire scenario is a trial-by-fire for the very first era in Turkey’s political history when civilian politicians have had total control over foreign policy.  Throughout the Cold War and into the new century, the Turkish military dangled a sword of Damocles over the necks of civilian Turkish politicians.  Now that the Turkish military’s influence has been removed, and with Fetullah Gülen’s adherents on the run, Turkish foreign policy is determined more democratically than ever before.  But this also means that the fraught process of study, thought, formulation, and implementation of policy, and responsibility for the results, lies squarely on the shoulders of Turkey’s civilian politicians and bureaucracy.  That, truly, comprises a new era.