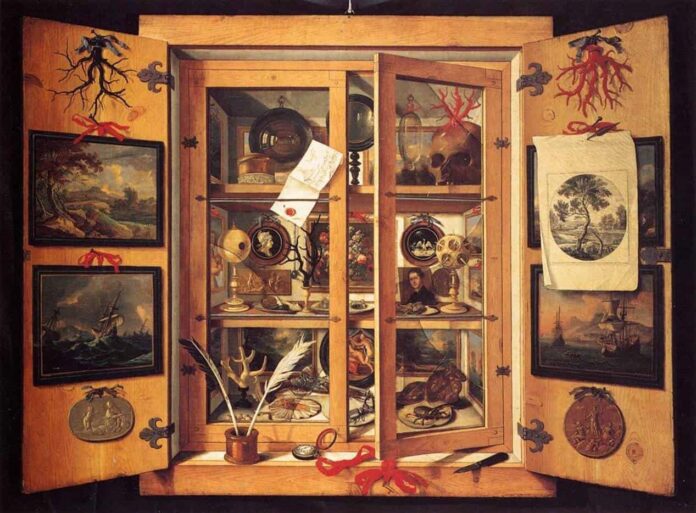 Before the somewhat defensive term “universal museum” was coined, there were just museums. But what was there even before museums, and when did they begin? The dawn of the early modern period, when Europe was both restless and increasingly affluent, certainly marks a watershed in this regard. Geographical and intellectual horizons were expanding in all directions and captains, funded by princes to undertake voyages of exploration and conquest, brought back hitherto unknown plants and animals. Merchant empires straddled oceans and from across the Atlantic as well as the Middle East, India and China, antiques of “other” cultures and civilizations also began to circulate. In an age without photography, it fell to Renaissance and post-Renaissance painters to produce such affordable images of everything as to bring a sense of all marvelous developments into aristocratic, bourgeois and middle-class households.

This was the historical moment for the rise of both the accumulation of capital, and the great collecting cultures of the West that accompanied it in the sixteenth, seventeenth, and eighteenth centuries. The privately acquired hoards of material objects initially went into special spaces variously called grottoes, studiolos, Glyptotheks, cabinets of curiosities, or cabinets of wonders. Their German equivalents might also be familiar to us, termed Kunstkabinett, Kunstkammer or Wunderkammer. In all cases, they served not only to assemble, keep and protect what were considered to be notable objects, but also to arrange, display and classify. With greater numbers there also came the need to impose a certain mental order— it was no accident that botanist and zoologist Carl Linnaeus fathered modern taxonomy in the eighteenth century. Gradually, whether through public or sustained private institutionalization, collections or cabinets of curiosities devolved into family or national museums. Museums in turn, as all-encompassing material wealth, have gone hand in hand with equally all-encompassing printed encyclopedias.

Early in this process, depending on how much the owner had, cabinet could mean a whole room as well as a large or small piece of furniture that acted as a microcosm of the universe. The classic cabinet of curiosities emerged in the sixteenth century, though more rudimentary forms of such collections existed even earlier, often as chambers used to house sacred treasures in religious spaces ranging from Greek temples (cella) to the crypts of Christian churches. When this space became secularized, the objects within could relate to natural history, geology, ethnography, archaeology, religious or historical relics, works of art, and antiquities. Hence, cabinets of curiosities were devoted to displaying disparate objects of varying backgrounds in a single place, attempting to capture the knowledge of an era in a panoramic way.

Ferrante Imperato, an Italian apothecary and scholar, produced the earliest pictorial record of a cabinet of curiosity we have—a fold-out engraving from his Dell’Historia Naturale (Naples, 1599), illustrating his own collection. Every inch of the ceiling is covered with stuffed mammals, curious shells and other marine creatures, with an enormous crocodile suspended from the middle. Coral samples are exhibited atop the bookcases, while to the left the room is fitted out like a studiolo, with a range of built-in cabinets that can be opened to reveal tiny pigeonholes filled with countless mineral specimens. Above them, stuffed birds lean against panels inlaid with stone (probably marble and jasper), below which there are other cupboards containing specimen boxes and covered jars. Books, jars, and botanical or zoological specimens are all crowded together, yet carefully arranged. In the lower right corner, a guide, possibly Imperato himself, is pointing out particular items to visitors. The English writer John Evelyn visited this early collection in 1645, declaring it to be “one of the most observable palaces in the citty, the repository of incomparable rarities.”

This engraving provides us with our earliest glimpse into the “cult of curiosities” — the knowledge of liminal objects that lay on the margins of (thus far) charted territory, brought back from worlds largely unknown, defying any existing or accepted system of classification (most importantly the conventional categories of the “arts” and sciences”), and associated with the discovery of “new worlds.” The fiercely guarded exclusivity of the cabinet of curiosities only carries meaning in relation to an absolute “Elsewhere” and the things that were brought back from it, where the “Other” lived, and there were wonders to be found. The raison d’être of the cabinet of curiosities was to impose its systems on the chaos of the unknown in mirroring the whole world, creating spaces that lay somewhere between the infinitely small and the infinitely large. Hence it was not merely a decorative display of aesthetically pleasing things, but also a genuine theater of learning and legend, implying a driving scientific impulse behind the collection, categorization, preservation and exhibition of objects. Individuals collected items that appealed to their particular sensibilities and interests. But ultimately, they arranged them to inspire wonder and amazement in a limited number of visitors and viewers.

The fact that cabinets were organized to reflect the aesthetic priorities of their owners, means that their history largely coincides with a handful of figures scattered across Europe. John Tradescant and Elias Ashmole at Oxford, Olaus Wormius in Copenhagen, Ulisse Aldrovandi and Manfredo Settala in Milan, Levin Vincent in Amsterdam and Hans Sloane in London are only some of many whose sixteenth and seventeenth century collections came to form the cores of today’s most famous museums. While members of the higher nobility were later followed by rich merchants and early scientists, in all cases this involved a transmission not only of objects but also of power relations. For many, collecting was (and is) a primarily social enterprise — the sheer logistics of locating, purchasing, and transporting curiosities has meant that very few individuals can and could acquire such items without connections to sources, dealers and expeditors as well as fellow collectors. Clearly, such participation in networks of information and objects was and has been an elite privilege, and such cabinets (later museums) have served not only as the reflection of the particular interests of their creators and curators, but also as markers of rank and status in society.

From the moment objects from “Elsewhere” began to be exhibited publicly in Europe, they were also manipulated to serve not only general but also some very specific purposes — such as colonial propaganda, entertainment, or inciting religious fervor and thereby eliciting missionary support. These “exotic” objects that had been completely displaced from their original contexts could also be used to influence the public’s imagining of the colonial empire, conveying a sense of hierarchy and paternalism toward the colonies. Cabinets of curiosity propagated this conception by creating an atmosphere of awe and fascination around the objects they displayed.

The public version of this private space and activity would take on the guise of a world’s fair. While claiming to represent the cultural production of the colonies in their entirety, such world fairs did much less and much more than that. They recreated and reinforced the dynamics of political power through theatrical displays and spectacles. In both settings, objects were first selected for their “oddity,” and were then stripped completely of their cultural contexts to be displayed solely as curiosities. While the colonies were political extensions of empire, their geographical distance to Europe led to their portrayal not as part of a unified nation, but rather as a completely alien Other. Cabinets of curiosity and similar “shows” were thus meant to be windows into an unfamiliar world, importing an exotic experience and also playing up the idea of the colonies as a site of intrigue. In trying to emphasize and dramatize differences between the colonies and the empire, contextual information was never a consideration. All displays were used as a way to artificially reconstitute an exotic ambiance, tending towards full novelty, in order to indulge European fascination with the Other.

In the 1560s Samuel Quieccheberg, a Belgian scholar of German adoption, had deemed the ideal museum to be “a theatre of the broadest scope, containing authentic materials and precise reproductions of the whole universe.” Accumulating, defining, and classifying the rare and the unique was the founding aim of cabinets of curiosities, coupled with placing them in special settings that would imbue them with added layers of meaning. From the British Museum and the Hermitage, to the Louvre and the Uffizi, the history of Europe’s (and the world’s) largest museums harks back to such early collections of princes and kings, noblemen and merchants, scholars and scientists. The trompe l’oeil painting in the heading, made by the German artist Domenico Remps in 1690, testifies to the importance that cabinets of curiosities had attained all over Europe by the end of seventeenth century, bringing viewers face to face with the curator’s conception of the entire world.

And yet, beginning in the seventeenth century, the focus of collecting shifted and broadened. The image above shows a little private chamber or study, a studiolo, the successor to the Renaissance cabinet of curiosities. Developing one’s knowledge of the world through a range of interests was coming to be seen as an essential part of a well-to-do person’s education. As knowledge was not yet compartmentalized in the way it is today, in Francken’s painting we see an array of tropical sea-shells and shark teeth, alongside a collection of Greek and Roman coins, all surrounded by a series of religious, history, and landscape paintings. The eighteenth century rise of well-defined disciplines, such as antiquarianism or archaeology, meant that collections could no longer represent just the wealth and intelligence of the owner. Now they also needed to make sense of the world we lived in a more objective and scientific way. This is what the human skull we see to the right of the top shelf in Remps’ cabinet anticipates — an existential urge to understand life in all its transience, coupled with the recognition that whatever wealth one might accrue, death will at once take away.