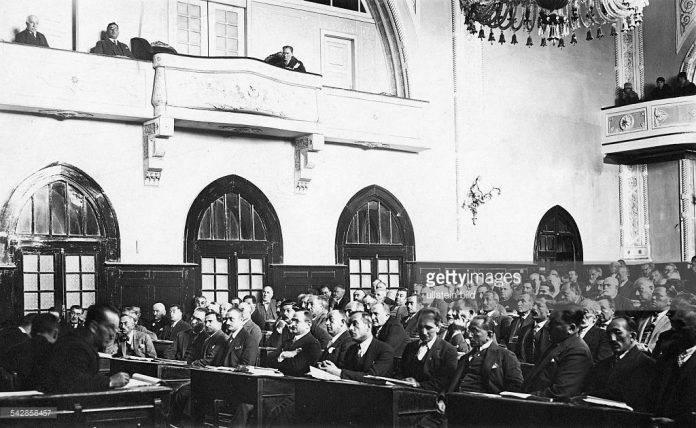 But not the oligarchy that we all learned about at school, i.e. the ancient kind associated with Classical Greece and Rome.  Those were oligarchies largely based on hereditary aristocracies, the sort that Aristotle and following him the 2nd century BC Greek historian Polybius saw as an intermediate stage (between monarchy and democracy) in a given society’s political development.

Instead, this is a modern oligarchy, appropriate for the modern age of industrial or industrializing societies of tens of millions of people and massive state bureaucracies.  This particular oligarchy emerged just as the country it came to control began the process of changing from a traditional agricultural to a modern, industrial society.  The society this oligarchy developed in already had a pre-modern state with the limited, shallow bureaucracy that such traditional agrarian states featured.

This oligarchy, in its first incarnation, would comprise three main classes that emerged and developed as society changed.  The first were the modern bureaucrats, who emerged as the state began to initiate institutional changes that the political leadership (mainly a circle of reform-minded counselors  around the monarch) thought necessary to respond to external challenges.  After a period of time these bureaucrats attained such institutional power that they developed their own networks and established relations with foreign dignitaries. They began to dictate policy, and the monarch’s personal importance began to wane further.

In more or less the same time-frame (or perhaps just slightly later), the first wave of institutional changes launched to create a modern state also gave rise to a new officer class. They received an up-to-date education, which meant that they imported and imbibed knowledge from the outside. Hence they came to embody foreign (Western) learning and culture (though this does not imply that there was any viable alternative). Further institutional change gave rise to an expanding public space of publishing, hence of writers and  readers (of newspapers, periodicals, novels and other literature). This meant the emergence of a modern intelligentsia, of public opinion, and oof open debates. Together these bureaucrats, intellectuals and officers began to dominate what was still essentially a rural, peasant-based society and economy. They became and remained a core oligarchy for many decades.

What stands out in all cases of state-led social engineering, though, was how the would-be “technocrats” rarely perceived the benefits, let alone the necessity, of converting subjects… into citizens. Technocrats generally saw “politics” as a hindrance to efficient administration. (1)

Actually, this particular oligarchy was not so unusual in its historical time-frame.  In many societies outside Europe, similar processes were taking place.  Because of Europe’s sudden ascendancy into unprecedented economic, political and military power, the rest of the world saw them as a model for doing the same.  But an important difference would be that in these newly changing societies, local elites — oligarchies — would initiate and carry out the process of transformation.  Their subject peoples contributed little to nothing into how these processes of change would be furthered, or what ultimate aims they should embrace.  Furthermore, the European template was not just political or economic. Those models came attached to values and ideals, so they also impinged on social, cultural, and even religious subjects.

The oligarchy in our particular society was no different.  Starting at an early point, the oligarchy set out to reform its society into a polity that could hold its own against Europe.  But such reforms were entirely from the top down without reference to the desires or needs of the masses.

After this first oligarchy’s effort to remold society had continued for several decades, a group emerged from within it that had more radical ideas — in an essentially European way — for changing society more quickly and drastically.  It recruited its members from all three sub-strata of the initial oligarchy, from which they separated themselves through their growing radicalism.

After a period of political and military ups and downs, this second, more radical group found itself in a position to take over both the earlier oligarchy and the state under it.  Once they had imposed their control, the radicals began to implement their more extreme ideas, and to directly intervene in society.

Concurrently, this radical group’s members also found themselves in control of state institutions, and, because the political system was not democratic and no mechanisms existed to oversee transactions within the state, they also began to benefit directly from the resources at the disposal of a modernizing state.  Hence the radical group and all those who joined it became virtually inseparable from the state.  They developed social, economic, political, and ultimately also ideological suzerainty over a society that they were recasting in their own image.

Eventually, however, that society also began to change.  The changes initiated by the first oligarchy and then the radicals generated aspects or dynamics that could not be tightly controlled. Willy nilly the economy generated new classes or strata, and society became ever more complex. It began to develop an ability to express its own political desires, often in opposition to the ideas imposed by the first or second (or integrated) oligarchies.  This took the form of political opposition, and slowly the older top-down groups (including the once-upon-a-time radicals) were forced to loosen their control over the state in order to avoid a complete political break-down.

At a certain point, society became able to force a system of democratic representation, and thereby to elect its own political representatives.  But when that happened, those popularly elected representatives found themselves confronted by an entire permanent (military-bureaucratic) establishment that was thoroughly controlled by the oligarchy.  Thus began the long process of society’s efforts to break down the oligarchy’s control over all state institutions.  Naturally, it was not an easy process.  At points violent clashes took place, but one aspect remained constant:  the people consistently kept electing those whom they felt represented them.

Slowly, little by little, society was able to win over the state establishment from the oligarchy. The process was extremely long and painful since the oligarchy was not eager to forego a century of social prominence, easy access to state resources, and the ability to impose its own political orientation on society. Because the oligarchy had controlled virtually all state institutions for so long, the state had basically become a matrix for their own social class, intertwined through personal, social, political or business connections, plus nepotism, favoritism, and back-scratching.  And they also had the support of the military, so their power was propped up by force if and when needed.  None of these connections were democratically accountable, so society was stunted and stultified for many decades under the weight of this privileged class.  Meanwhile, other groups from within society also began to develop their own non-democratic methods of penetrating state institutions for their own advantage; eventually, one of them became powerful enough to threaten the entire country’s political stability.

Simply put, with this long oligarchical history behind them, Turkish state institutions have never been democratic, and have never been subject to complete democratic oversight.  Only in the past ten years have real steps been taken to complete the transformation of Turkish state institutions from pre-modern, non-democratic, extraction-focused structures to a modern, transparent, service-oriented apparatus.  Hopefully, the reaction to the 15th July coup will accelerate this process.