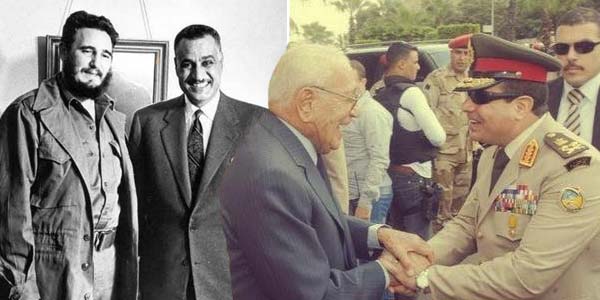 When Fidel Castro and his victorious men marched into Havana in January 1959, slung round with guns and bandoliers and sporting their bushy beards, President Nasser tended to dismiss them as a bunch of Errol Flynns, theatrical brigands but not true revolutionaries. He did not pay much attention to Castro’s movement because there was a great deal of American support for Castro at that time, and although Nasser thought Latin America was ripe for revolution, he did not think any change could succeed there without American approval. (1)

In early 2015 Halil Berktay published an essay for Serbestiyet where he referred to a name that caught my attention.  Towards the end of some extensive reminiscences about the Turkish left in the 1960s and what might have occurred if Turkey’s “Baathists” aligned with left-Ataturkist elements in the Turkish military had succeeded with their 9 March 1971 coup plan, Berktay mentioned the once-famous Egyptian journalist Mohamed Hassanein Heikal (2). Throughout the entire 1950s and 60s period that Gamal Abd en-Nasser controlled the Egyptian state, Heikal was a close confidant of this military ruler. Born into an affluent family, Heikal had received a degree from the American University in Cairo, and his fluency in English enabled him to go into English-language journalism.  This, and his proximity to Nasser, made him ideally suited to writing for an international audience on Egyptian affairs.

For twenty years I’ve had Heikal’s book The Cairo Documents on my shelf, a book bequeathed to me by a professor in the 1990s.  I spent a year in Egypt in the same decade and had heard Heikal’s name many times, so I had a general idea of who he was.  However, I could not exactly place Heikal in historical perspective.  Consequently, I had never read Heikal’s book, other than to look at the pictures of Nasser with various world leaders of the time (including some with Castro, as seen above).

Halil Berktay’s article provided the missing piece of perspective that I needed to comprehend Heikal, who continued to speak with grand but vague platitudes about national revolutions until his death earlier this year at the age of 92. Now I understand Heikal as a specific type of alla franca person, attracted to power and influence, and prominent in the post-WWII era of decolonization and national revolutions in the developing world. Nominally leftists, but in reality feeding on a tossed salad of nationalist, statist, socialist, fascist, populist and even elitist ideas, most of these people disappeared from the scene either as the victims of violence their ideas helped to inspire, or with the end of the Cold War.

Heikal is a rare bird in that he survived well into the post-Cold War era, and Egypt’s specific political circumstances once again brought him to the fore as Mubarak’s regime began to crumble.  After Nasser’s death, Heikal did not retain his original clout for long, and he fell out with Sadat in 1974.  When Mubarak came to power in 1981, Heikal was briefly rehabilitated, but largely disappeared from sight in the 1980s and 90s.  Over the past fifteen years, Heikal regained notoriety through his critiques of the Mubarak regime, largely voiced through a series of appearances on Al-Jazeera.  It now appears that Egypt’s new military strongman, Adb al-Fatah es-Sisi, also turned to Heikal for advice over the past several years of turmoil (the banner photo to the right speaks volumes for Heikal’s sycophancy vis-à-vis this latest in a whole line of military dictators).

Turkey, too, has produced its share of Heikal-like press figures. I noticed long ago that there were a number of not only individual Turkish journalists, but also Turkish publications and even Turkish media companies that were close to the Turkish military, and which clearly benefited materially from publishing news that was little more than propaganda for whatever segment of the Turkish Armed Forces that they happened to be aligned with.  But because the AKP draws its political power not from the military but from popular democracy, most of those Turkish Heikals have seen their ascendancy wane dramatically over the past fourteen years.

The Cairo Documents by Heikal, published in the early 1970s, is worth reading because of the information it provides about some major international figures, including leftist national leaders like Fidel Castro, Che Guevara, Chou En-lai, Josef Tito or Jawaharlal Nehru.  More specifically, it sets out the problems that those idealistic visionaries encountered as they attempted to turn their ideals into concrete solutions to the challenges posed in the process of creating a modern state and society.  Whether any of them succeeded is another issue.

All of the book’s chapters are interesting, but the last section on Nasser’s interaction with the Cuban revolutionaries is particularly notable.  Heikal was directly present at the Egyptian leader’s meetings with Fidel Castro, Fidel’s brother Raul, and the Argentinian romantic revolutionary “Che” Guevara.  Heikal’s account is an attempt to show how pragmatic Nasser was, and how effective his efforts were at Egyptian state-building and industrialization.

But the long-term results of Egypt’s attempts to industrialize and construct solid state institutions have been extremely disappointing. Egypt’s development has largely stalled for the last forty years, so one can question how accurate, prescient, or objective Heikal’s account was.  To make matters worse, the Obama Administration has moved to strengthen U.S. relations with the Cuban government even though Cuba has not democratized, and while Egypt did experience a true democratic uprising in 2011, the same U.S. government has basically looked away as the Egyptian military carried out a summer 2013 coup d’état against the democratically-elected Morsi government.  Finally, even prominent E.U. politicians have so completely lost their political bearings as to tweet complimentary messages upon Fidel Castro’s recent death (3).  Such hypocrisy is gut-wrenching.

(1) Mohamed Hassanein Heikal, The Cairo Documents:  The Inside Story of Nasser and His Relationship with World Leaders, Rebels, and Statesmen, Doubleday, 1973, p. 343.