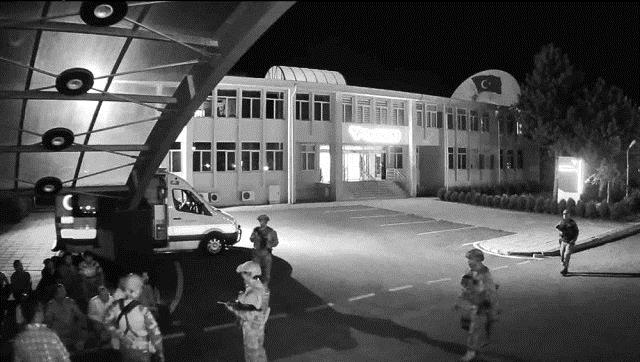 In the previous article I discussed the first two subtitles of Patrick Kingsley’s recent NYT article on Turkey’s 15th July 2017 failed coup (1).  On both issues – who carried out the coup attempt, and who had what information about the coup before it actually was put into motion – Kingsley tries to conjure up a certain murkiness where in fact none exists.

The third subtitle is “Why Was the Coup so Poorly Executed?”  That clause is difficult for me to type because frankly, it affronts my sensibilities.  Even before the violence had entirely subsided, this claim originated among foreign observers who clearly had wanted to see the coup succeed.  The claim is obscene and reflects a chilling insensitivity to all the lives that were lost.

Mr. Kingsley devotes three paragraphs to that topic, and all do nothing but expose the author’s lack of information about the situation (or its historical backgrounds).  The first paragraph notes that the coup attempt began with road closures on a Friday evening, which the author sees as strange, and that “some observers” argue that the coup was moved up from an early morning schedule because they were found out.

Unbeknownst to Mr. Kingsley, the Turkish military’s interventions into politics have almost always taken place on a Friday (2).  Why the military have always chosen Friday is unclear, but some claim that it is a purposeful attack on the day considered most sacred to Muslims. Fethullah Gülen’s operatives clearly saw the 1960 coup as their template, so that may have been a more specific reason.

Also, that the coup was originally scheduled for 3:00 in the morning is not debated; it’s an accepted fact.  When the Turkish National Intelligence Agency (MİT) received the tip that a plan to kidnap its head, Hakan Fidan, was scheduled for that night, a series of events was set in motion.  One of those events was the decision by the Chief of General Staff, Hulusi Akar, to close Turkish airspace to all military flights.  That order was sent out to all of the relevant military commands in the country, many of which, however, were under the control of Gülenist officers.  They in turn knew immediately that something had gone awry, and the decision was taken to act earlier.  This is a perfectly clear, evidentially supported and also logical explanation of what happened.  Because the coup attempt was moved up, many details of the operation didn’t go according to plan since all of the conspirators had expected to initiate the coup attempt around six hours later.

Mr. Kingsley then mentions, with heavy insinuation, that Turkey’s state broadcaster, TRT, was taken under control but that the country’s private channels were not targeted.  Apparently, the author chose not to do even the most basic research on this issue.  In fact, as the banner photograph shows, the coup targeted TÜRKSAT, the national satellite TV provider, and if that bombing had succeeded it would have knocked out all TV access for a vast section of Turkey’s citizens (3). Turkey has literally hundreds of TV channels, many national but most local.  In other words, if the coup plotters had wanted to go after each and every TV channel they would have had to devote to that effort commanders, soldiers, and resources that they did not have.  Instead, it was much more logical to go after the main source of TV access in the entire country.  And Doğan Media Center, where Channel D and CNNTürk are located, was occupied later in the night after it became a conduit for President Erdoğan to address the nation.

On the topic of communications, there are other important points that apparently didn’t occur to Mr. Kingsley to discuss.  For example, as many are aware, President Erdoğan was able to connect with his smartphone to CNNTürk through Facetime, and then to call Turkish citizens to take action.  So what about telecommunications?  The coup plotters had intended to take control of and disable both Türk Telekom (4), the main state telecommunications provider, and Türkcell (5), Turkey’s largest private cell phone provider.  Neither attempt was successful, so both telecommunications and social media remained open throughout the night.

Finally, Kingsley touches the topic of why important political figures were not apprehended by the plotters.  In reality, the plotters had extensive lists of people to be rounded up (6).  But because the plan was moved forward to the late evening, many of the targets were not at home or were on the move.  Prime Minister Binali Yıldırım, for example, was in Istanbul, received news of the coup attempt as soon as soldiers entered the Bosphorus bridges, and was able to use his official vehicle to return by road to Ankara.  Because of the unstable security situation in the air, he took shelter in a mountain tunnel near Kastamonu that was under construction (7), stayed there for nearly two hours, had to avoid gendarmes that opened fire on his vehicle, and reached Ankara only after 12 hours.  Other leading figures were also on the move, returning from ceremonies or other government functions.

Over several days, the plotters had tried to map out the hotel and the specific building that President Erdoğan would be staying in.  In fact, they were so desperate to gain information about the hotel that they resorted to having conspirators fly F-16s over the hotel in order to take pictures for the commandoes that would eventually carry out the raid (9).  Their problems in pinpointing exactly where the President was, combined with the coup attempt being carried out earlier than planned, provide extremely plausible explanations for the failure of the commandoes to capture (assassinate?) President Erdoğan.  Well after the coup attempt had clearly failed, in their frustration one of the commandoes’ helicopters resorted to random firing into the hotel’s facilities simply to cause damage (10).

The comments from one of the commandoes, Mr Sönmezateş, that Mr. Kingsley included should be seen in light of the difficulties that the conspirators had in pinpointing President Erdoğan’s whereabouts.  Additionally, Gülen’s organization has tried to construct the “controlled coup” narrative through both its members on trial and its journalists now continuing their activities in the U.S. and Germany.  Many of the conspirators, such as Sönmezateş, are making similar statements to the courts.  The conspirators have apparently been able to communicate with the outside world while awaiting trial, and a common set of talking points has been developed.  Sönmezateş’s comments about being “made to wait for four hours” are a part of that effort.  The reason why the commandoes waited was that the conspirators didn’t have exact information on President Erdoğan’s position.

(3) The Gülenist plotters first sent their civilian and military agents to TÜRKSAT, then tried to cut its broadcasting capacity by bombing it, which failed:  http://aa.com.tr/tr/15-temmuz-darbe-girisimi/turksat-baskini-davasi-basladi/787305; https://www.turksat.com.tr/tr/haberler/darbe-girisimini-arastirma-komisyonu-turksati-ziyaret-etti

(9) http://aa.com.tr/tr/15-temmuz-darbe-girisimi/erdoganin-kaldigi-oteli-iki-gun-f-16-ile-fotografladilar-/785104; when the commandoes reached Marmaris, according to reports, they even tried to get information from locals that they encountered: http://www.cnnturk.com/turkiye/marmariste-darbeci-askerler-otelin-yerini-vatandaslara-sormus