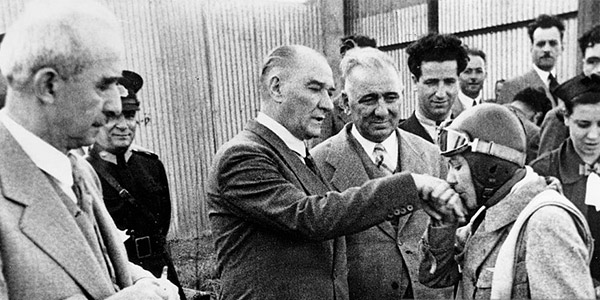 In the previous column (1), I explained that the framework used by Steven Cook for his recent Foreign Policy article (2) was flawed.  My first aim was to point out that the “imagination” of Mustafa Kemal Atatürk so warmly described by Cook was not nearly as pleasant as he makes it sound.  The final two segments of this series move on to the other major problem in Cook’s piece, which concerns his description of the Turkish-Kurdish conflict.

Mr. Cook characterizes the conflict between the Turkish state and the PKK as a 30-year “struggle between two nationalisms, and the identities linked to them.”  This is not accurate. First of all, the process extends back to at least 1925, when Kurdish clans in Eastern Anatolia, having realized that they would not be granted the autonomy that Mustafa Kemal promised them in 1919-20, broke out in a partly religiously triggered revolt (3). What has come to be known as the Shaykh Sait Uprising was suppressed by the Kemalist government, and its leaders were executed.  From then until 1938, the Kurdish population in Eastern and Southeastern Anatolia was in a state of nearly constant unrest and even rebellion against the régime.

In 1937-1938, another massive uprising centered on Dersim broke out.  This time, Kurdish zaza tribes of Alevite belief were largely involved. The revolt was brutally crushed by the Turkish state (note that Mustafa Kemal was still alive), with an estimated 13,000 tribesmen killed and another 12,000 civilians forcibly resettled.  Sabiha Gökçen, now eulogized as Turkey’s first female airwoman, took part in bombing tribal concentrations during the insurrection (4).  In order to erase the event from national memory, the Turkish state renamed Dersim as Tunceli.  After this 1937-1938 conflagration, Turkey’s Kurdish provinces remained uneasily quiet until the political turmoil of the 1970s and the Cold War context gave a young militant by the name of Abdullah Öcalan, inspired by Maoist theories of “people’s war,” and fashioning his own synthesis of neo-Stalinism with Kurdish nationalism, the opportunity to reignite the violence.  And that’s exactly what the situation has been since 1984, when the PKK carried out its first armed attacks on army outposts in Eastern Anatolia.

Second, a political opposition to Mustafa Kemal did exist from the initial stages of what became known as the Turkish War of Independence.  That opposition was broad and diverse, but was never given the chance to fully articulate its ideas.  Between the First and the Second National Assemblies, rigged elections gave Mustafa Kemal a much more pliant parliament in line with his vision and intentions.  The Progressive Republican Party, which emerged from that Second National Assembly in opposition to Kemal’s CHP, was promptly shuttered in 1925 after the Shaykh Sait Revolt.  From 1925, no opposition to Mustafa Kemal’s political line was tolerated, and even the short-lived Free Republican Party of 1930, which was initiated from the top down as a limited attempt to gauge the level of Turkish society’s resistance to Kemal’s reform projects, to identify the political issues important to the Turkish masses, and to create a loyal opposition (5), was no exception.

One strain of that nascent Turkish political opposition is the tradition which has eventually given  rise to the Justice and Development Party (AKP).  This legacy, which is traced back to Prince Sabahattin, a late Ottoman-era member of the royal family, was marked by liberal political preferences, admiration for a market economy, and respect for Turkey’s traditional culture and religion.  After Turkish elections became democratized in 1950, politicians such as Adnan Menderes, Süleyman Demirel, and Turgut Özal would be associated with that ideological heritase.  It is that tradition that has come to the fore yet again as the old statist-nationalist, Jacobin and authoritarian modernist weltanschauung of first the Unionists and then the Kemalists that dominated Turkish state institutions until the beginning of the 21st century began to break down under the pressure of a series of massive AKP electoral victories.

Until the AKP era, whenever that more liberal, center-right, culturally “native” political tradition began to threaten the Kemalist elites’ ideological grip on the Turkish state and society, the military stepped in to reassert political and ideological control:  the 1960, 1971, 1980 and 1997 coups, as well as an aborted attempt in 2007, can all be understood in this framework (6).  Another way to comprehend the Turkish state’s political reality is that, until 2007, at no time had the Turkish military disconnected itself from the civilian political sphere.  After Mustafa Kemal’s 1938 death, the Turkish military, which was the key actor in making İsmet İnönü president after Kemal (7), also collectively and institutionally took Atatürk’s place as the shadow glowering in the balcony overlooking the Turkish parliament.  As Cemil Koçak has explained, before 1938 the Turkish military was never distant from politics, and after 1938 military plotting against civilian governments began as early as 1946 (8).

What this means is that the Kemalist elites in the state bureaucracy and the military always held sway (or exercised tutelage) over Turkish state institutions — until about ten years ago.  Those same Kemalist state elites, whose intellectual heritage was that of the Unionists (the CUP), were also the instigators of oppressive policies towards Turkey’s Kurdish population (and indeed all non-Turkish, non-Muslim “minorities”).  Until 1950 Turkey was a republic but not a democracy in the minimal sense of the word; after 1950, the Turkish military and its state bureaucratic allies maintained an uneasy and conflictual domination, but still a domination, of virtually all state institutions.  It is not a coincidence that only when the AKP gained the ability to make serious inroads into the old elites’ grip on such Turkish state institutions, did Turkish society begin to wake up to its Kurdish reality.  The AKP comes from a different political tradition, and this is a prime reason why, starting more than a decade ago, they were able to begin positively and directly addressing Turkey’s Kurdish citizens.  This, for example, is why, in 2011, then-PM Erdoğan was able to publicly and officially apologize for the Dersim massacres (9), whereas CHP leader Kemal Kılıçdaroğlu, who actually happens to be from Dersim, cannot bring himself to discuss the matter, or who may have been responsible for it, in open and honest terms (10).

(6) The 1980 coup was a carried out against more diverse political forces that included the Turkish left as well as right-wing parties and religious movements.